Since the world population had already reached 5 billion in 1990, why is soy protein increasing so much?

Let’s see how much feed has a negative impact on the environment.

Increased soybean production is a history of deforestation

Large-scale soybean farms accounted for 17% of Amazon’s deforestation between 2001 and 2004 * 4, and were a major contributor to deforestation * 5. In addition, deforestation due to increased soybean production has been confirmed * 6, and with calls from Greenpeace and others, the world’s leading soybean companies have been cultivated on land cut down in the Amazon, Brazil, since July 2006. Agreed to not buy soybeans, soybeans from farms with forced labor, and became moratorium.

However, deforestation continues in other areas.
Large-scale grain majors come to the land to cut and burn, and because the climate is not originally suitable for soybeans (soybeans are native to East Asia), they can modify the soil or plant genetically modified soybeans to fertilize and poison them. It is said to sprinkle pesticides such as the herbicide glyphosate. As a result, water resources that are important to the local people are being depleted, and even the health of the local people is being harmed * 7.

For example, Gran Chaco further south of the Amazon

Gran Chaco spans Bolivia, Paraguay, Argentina and Brazil and is a treasure trove of ecosystems with an estimated 3,400 plant species, 500 birds, 150 mammals, 220 reptiles and amphibians. was?). The size of the forest is as valuable as the Amazon.

There is deforestation for soybean production, which is prominent in Bolivia and Paraguay. Indigenous peoples who rely on forests are also at stake.

It can be said that the change in Paraguay is even more drastic. Between 2001 and 2018, 57,200 square kilometers were deforested * 8. Paraguay has a land area of ​​406,752 square kilometers and has lost 14% of its land area of ​​forest. In 2019, Paraguay’s environmental protection agency, INFONA, announced that about a quarter of the deforestation that occurred in Gran Chaco between August 2017 and August 2018 could be illegal logging. * 9.

It’s hard to stop. The northern part of Argentina is this Gran Chaco area, the southern part is a little desolate, and the forest area is concentrated in this area. Between 2001 and 2018, 57,700 square kilometers of forest was lost * 8, and Argentina lost 22% of that precious forest in the 25 years from 1990. Most have turned into large-scale soybean farming. Furthermore, it has been reported that the water absorption rate has dropped sharply due to the effects of deforestation, causing floods * 10.

Click here for a photo of the development . Or from here . The target in the article is European imports, but of course Japan is not another person.
Japan imported 109,423,000 tons of soybean meal from Paraguay and 124,772,000 tons of soybean meal from Argentina in 2017 * 12. Japan also imports soybeans from these countries, and also imports a large amount of livestock products from Brazil, Europe and the United States.

As a reminder, after the forest was destroyed, it became not only a soybean farm but also a cattle ranch. Both are being cut down for the livestock industry.

For example, the Cerrado next to Amazon

Brazil’s Cerrado refers to the tropical savanna area next to the Amazon. This Cerrado is a rich and rare area with a second largest ecosystem in South America. 150 amphibians, 120 reptiles, 837 birds and 161 mammals have been recorded. It is also a valuable water source for the locals.

The loss of forests in Tocantins in the Cerrado will amount to one in Tokyo in 2017 alone. In 2017, the largest soybean trading company operating in Toncantins was Aglex do Brasil, a subsidiary of Mitsubishi Corporation * 13. The amount handled by Agrex do Brasil accounts for 18% of the soybeans produced in Tocantins, all of which are said to have been exported.

In the first place, land development such as soybean production in the Cerrado was promoted by the Japan International Cooperation Agency (JICA) as the Japan-Brazil Cerrado Agricultural Development Cooperation Project (PRODECER) together with the Japanese and Brazilian governments. And that has driven the nature of the Cerrado into a catastrophic situation. I don’t know what it was like at the time, but in the end it was a business that would eat up the future. It is written like this on the page of JICA-RI

“Brazil, one of the world’s major grain producers and the world’s largest soybean exporter in 2011, was once a grain importer. In the 1980s, large-scale agriculture with the cooperation of Japan. The development has transformed the once barren, vast tropical savanna region of Cerado into one of the most productive agricultural areas in the world. It is the first realization of modern grain farming in the tropics and is also called the “Cerrado miracle”. (Https://www.jica.go.jp/jica-ri/ja/publication/booksandreports/post_20.html) “

What a mess.
Perhaps it was wrong to think of it as a barren land in the first place. We know that we have found the significance of creating industry, but the responsibility for opening Pandora’s Box of deforestation, which destroys the region’s precious and wonderful biodiversity and accelerates climate change, is not heavy. Is it? Why is it still written to praise it rather than reflect on it? The losses caused by the idea of ​​the high-growth period still continue, leaving a stigma in the future.

The Brazilian activist who came to Japan last year was the “Mozambique Brazil-Japan Three People’s Conference 2018” (sponsored by the Executive Committee of the Three People’s Conference), where JICA’s business and the large-scale agriculture by large companies expanded by it helped the local people. People have been accused of being deprived of land, depleting water resources and killing indigenous peoples and activists who oppose development * 14.

It is also argued that the aforementioned soybean moratorium should be expanded to this Cerrado * 11.

However, in the end, if we do not reduce factory livestock farming, which uses a large amount of soybeans, some forests will be sacrificed . Unless the soybean moratorium is spread around the world, it will disappear from weak countries, unregulated countries, and forests that were for indigenous peoples. As it used to be. 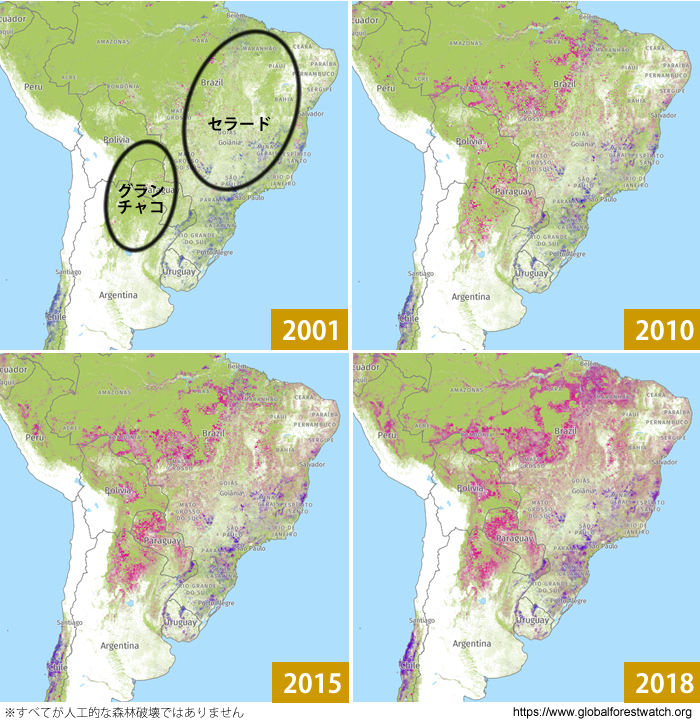 What to take away from the future

Of course, no one should think that Japanese people have nothing to do with South American countries. What humanity loses and what the future loses is great.

These areas, which are a treasure trove of ecosystems, are home to many precious species. Jaguar, big anteater …

Its natural continuity is important for preserving biodiversity. The Cerrado no longer has this continuity. It looks like a cut and pasted pattern. You probably already know that animals are confused and have difficulty living.

Japan imported 190,802,000 tons of soybean meal (soybean meal) from Brazil in 2017 and 357,215,000 tons in 2018 * 12. It becomes feed. Furthermore, considering that Japan imports about half of chicken from overseas (especially Brazil), there is no doubt that indirect consumption of soybeans in Japan = consumption of livestock products is also accelerating this deforestation.

You have to rethink and rethink your eating habits to see how much the chicken and eggs that are fed soybeans and come to your table are costly.
Climate variability, deforestation, biodiversity collapse, human rights issues associated with it, various issues and factory livestock farming are one.
Rather, these problems are occurring because of factory livestock farming.

Nowadays, you can find a lot of information on the Internet. Nevertheless, it should not be allowed to ignore the problem by saying, “I am relieved of what I am eating” and “The food provided by Japanese companies should be considered.”

Finally, as a Japanese, I would like to defend Japan a little. The amount of soybeans that Japan imports from Brazil is 559,853,000 tons in 2018. Since it contains both oil and water, it is difficult to compare it with the amount of soybean meal imported, but Japan has a lot of efficient direct consumption.
Also, by choosing domestic soy sauce, miso, and non-genetically modified soybean meat, it is relatively easy to keep away from deforestation. 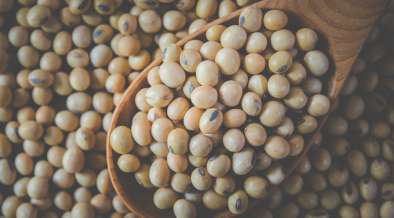 Will we all be vegan in the future?